As I get ready for Greek Easter this Sunday, I’m starting to get into the festive mood, and with festivities comes lots of color, extravagance and uniqueness.

The same qualities can be said about the Mets Holiday uniforms for 2019, undoubtedly the best since this relatively new tradition was introduced to Major League Baseball.

So let’s look at the special event caps and jerseys and give it an honest critique:

The Mother’s Day cap this year in slightly inverted from the previous iteration that we saw in 2018. Instead of the pink panel, we see a pink brim, and a blue top panel. The interlocking “NY” is also in pink. Like last year, regular Mets uniform tops will be worn with the Mother’s Day Ribbons. Overall this is a good look, nothing revolutionary, but good overall.

What used to be a C- has just turned into a C+, as the camouflage, something I’ve never been fond of in a baseball uniform, is now being worn on the proper corresponding holiday. Unfortunately, that’s the only tangible improvement that can be seen… The cap is rather dark, uninspiring, and, well camo!

I think this will look better on some teams over others, but I still view this as an average cap that I won’t be thrilled to see on-field. 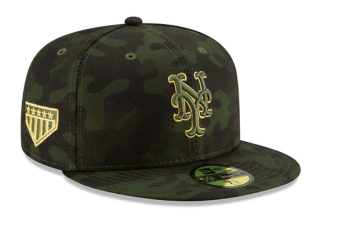 The only cap we don’t have a photo of, this cap is your standard Mets cap with a respectful, Memorial Day MLB patch. In addition, the uniforms have a “lest we forget” poppy, which is also a nice touch when remembering our fallen. The best part of all of this, though? None of this is for sale, so the motive for this (at least in a direct sense) isn’t profit driven.

This tie-die Mets cap is probably the only one here that I will end up buying myself. I love the sky blue tie-die, and the royal blue brim, it’ll match my socks from a couple years ago. I give this one an A+, while it doesn’t look great for all teams, it’ll look dandy on the Amazin’s.

Outside of the National League patch, this cap strikes me as rather… unremarkable. The theme here is throwback logos, given the 150th Anniversary of Major League Baseball, but the Mets have never had a radically different cap logo, and even the small differences that would set a 1962 Met cap and a 2019 Met cap apart are not incorporated into the logo. With that being said, the cap itself is still visually pleasing, but I’m sure I’ll have a different thought when it’s juxtaposed with the royal blue Mets uniform.

What’s your thoughts of the 2019 Holiday Mets uniforms? Let me know in the comments down below, or on Twitter, @NikoGoutakolis.