Yesterday, at around 3:00pm, I packed my bags, got my final folio from the Renaissance Columbus, and took the six block walk down Broad Street to the bus stop, where I would take the COTA AirConnect to John Glenn Airport, and, after a quick stopover in Chicago, make my way back to New York.

However, something extremely unusual happened at the bus stop. As I was waiting for my bus to arrive, another bus was pulling in, and after all the customers had boarded, the bus operator, whom I had never met before, says “Hey! You write about the Mets, right? My son follows you online!”

We ended up having a nice (and brief, the bus was still in revenue service) conversation about the Triple-A All-Star Game, and about Columbus.

And while it wasn’t the first time that I’ve been recognized in public, it was a first outside of the New York Metropolitan area, and it truly made not only my day, but probably my entire trip.  Best of all, it was a euphemism of the culture in Columbus, one of happiest and most welcoming cities I’ve ever been to.

From the folks at the visitor centers, to the amazing hotel staff, and of course the local men and women on the streets; everyone, and I mean everyone, was so passionate and genuine.

The game itself embodied the same Columbus values. My entry experience was flawless, and I was given a game program detailing the rosters for both teams, and a breakdown of the days festivities. 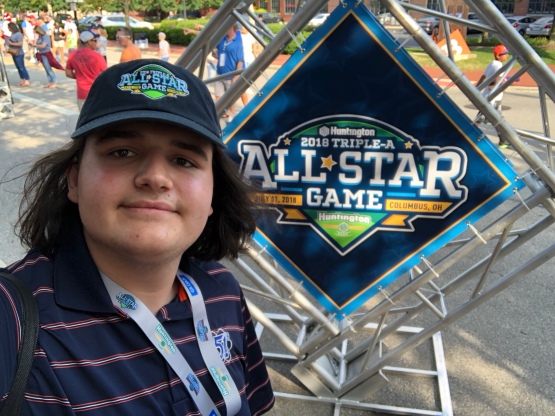 As I approached my seats, an usher asked me “Do you know where you folks are headed?” instead of the usual snap call for “Tickets!”, “Let me see your tickets!”

It’s amazing how a little re-phrasing can make someone feel so much more welcome.

There were various familiar faces (to Mets fans) in the Triple-A All-Star Game. Eric Campbell was the starting Second Baseman for the New Orleans Baby Cakes (Marlins), and Adam Wilk pitched for the Toledo Mud Hens (Tigers). 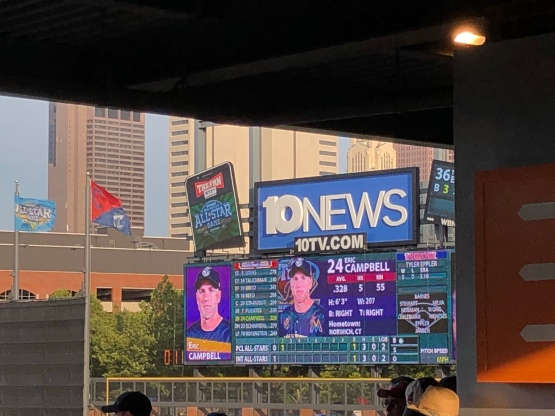 I was in my ticketed seats for the first two innings of the game, but eventually moved out to the berm in left center, which reminded me of the one in Tradition Field during Spring Training. All of the typical sights, from the kids rolling down the hill, to the catches between parent and child, and the wide variety of colors on beach towels were present.

My favorite part of the ballpark were the tree-lined outdoor concourses. At certain times, I didn’t even think I was at the ballpark.

Even the covered concourses were nice and airy.

I eventually moved closer to home plate, behind the third base dugout for the last three innings.

I loved how there wasn’t much netting obstructing the field of play. This is a touchy subject around professional baseball, but I’ve never been a netting fan.

The Pacific Coast League won the game, only their second victory in the last ten years, which was fitting for me, as I will once again be rooting for the International League in 2019, as the Mets move their Triple-A Affiliate to Syracuse, New York.

Thank you to the Columbus Clippers for hosting a fantastic event. Without any semblance of doubt, this was the best Triple-A All-Star Game I have ever been to (and I’ve been to eight now), and they have truly set the bar, thanks in part to being great with the intangibles. Columbus has trained their employees with poise and elegance, and it’s comes off on the fans.

El Paso, you’re up next!