46 pitches, 36 strikes, and four dominant innings. A total of 18 ¹/₃ innings of consecutive scoreless innings. Then, all of a sudden, Paul Sewald is seen warming up in the bullpen, and ace Jacob deGrom is out of the game. 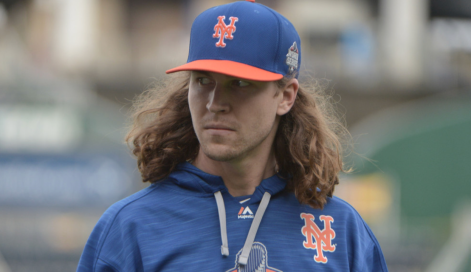 There was no dramatics on the field, no cart taking him off the field, it was eerily quiet. Nothing more than an odd swing followed by the tiniest of grimaces.

After the game, the Mets announced that the injury was a hyperextended right elbow, a similar injury to what J.J Putz suffered in 2008, which set Putz back five weeks.

Mets third baseman Todd Frazier, however, was more hopeful, saying it shouldn’t be more than “one or two days to get back in the groove” but admitting that it could take longer as a pitcher who throws 100 pitches every five days.

If deGrom cannot make his next start in Cincinnati, Seth Lugo, Matt Harvey and Corey Oswalt are all plausible alternatives.