Please note that all pictures used are property of Gary Dunaier, this post would not be possible without his photography, see all of his images and albums here.

The first version of the Citi Field Scoreboard was one of the best for simplicities sake. It’s also technically the longest-lasting one, from 2009 until 2011. It features the lineups with respective lineups on the side, followed by the score and count below it. Underneath that was the pitcher’s name and very basic stats. Also present was the time and some unique trivia.

It was rather primitive in terms of graphics and special effects. Whenever a play occurred, the right field board would switch to the live cam of the action. Similarly, whenever a chant took place or something to draw people’s attention, only the top part would “react”, wheras the bottom part would still show the essentials (score, time, count).

This is a nice board, don’t get me wrong. There is far more in terms of statistics, and the pitcher’s stats are taken care of. The lineups are still on this board (unlike the score, you have to look to the center field board or the line boards for that), but they are smaller as they are trying to accommodate as many things as possible. Instead of the time in the bottom right corner, we see a “due up” board, which we can find directly above it, so I’m not too fond of that.

The advanced stats are also nice, but if you were sitting up in the Promenade, they were incredibly hard to see, which wasn’t the best. After the first at bat, however, the board’s advanced metrics became much more useful.

After two years, this board was once again, revamped. If you would add the time and a small score, then this board is a ten.  8/10

This board was the last of the “old boards” before the center and right field boards got reconfigured in 2015. This was the last year of the “soft-retro” look, before the board tried to look sleek and modern.

Before the game started, the board accomplished to show both the lineups, and the pitching probables. The score also returned to the right field board, this time above everything. One oddity about this board was how the team name doubled as the lineups and the team name for the scoreboard. It was somewhat odd not to see the “NYM” or “Mets” to the left of the line score, and just the opposing team’s logo.

The time returned, this time in a old fashioned way, accompanied by the temperature, which, for some reason, only appeared in 2014 and for a portion of 2015 on the center field board. Please bring that back!

During the game, everything was the same sans the middle, now showing the hitters stats. Additionally, the diamond team logo doubled as a “who’s on base” board, as seen by yellow circles.

Pitch count and a small advertisement for a future game is below the hitters notes. Essentially, this is a more refined version of the original board, with everything a little more clear. This is probably the best board we’ve seen. 9.5/10

If 2014 was the best right field board Citi Field had ever seen, get ready to see the worst. So bad, they had to overhaul it three homestands into the season. This one is so bad, that I have to show it to you first before saying anything else. 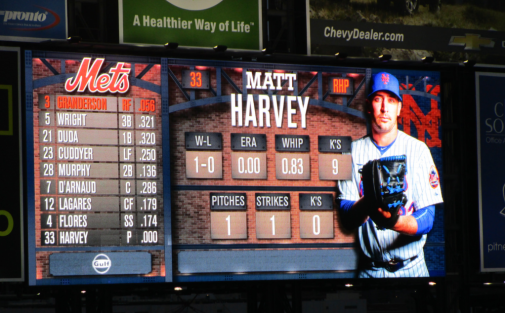 First, some backstory. During this design, the Mets decided to make two boards act in tandem as one. Essentially, they assumed that a fan would be able to see the centerfield scoreboard and the right field scoreboard all the time, so you would only see the lineup from the team that’s batting on the centerfield board, while the fielding team’s lineup and pitching stats were presented on the right field board. Gone is the time, temp, line score, batting stats and both lineups. The unused space in this configuration is enough to drive one up the wall, but the most egregious problem of all was the fact that there was no score on the right field board (which far more people can see compared to the centerfield board).

Well, yes, I did, because in 2012, the score was always available on the line board, and on the centerfield board, since the board wasn’t enlarged, they kept the bottom portion dedicated for the score. In 2015, that wasn’t possible, given the size of the board, so you were left without the score during Let’s Go Mets chants, games, and sing-a-longs. Here’s a comparison of the center field boards: 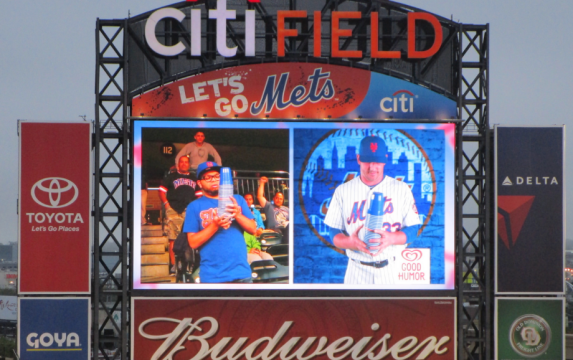 Ultimately, this 2015 board was an abomination. Thankfully, it was modified in May. 2/10

This board keeps everything from the April 2015 board, but enlarges the lineup, adds the score and count, and you also get a little “at bat – due up” sign for those that can’t see the centerfield board. This was really just a stop gap measure, only meant to save face until another overhaul in 2016. 6.5/10

Technically, these are three different boards, but they have the exact same layout, just with slightly different graphics, so I’ll review them as one.

The one carry over from 2015 was the pitcher stats in right field board, with no space left over to show any hitting stats outside of the lineup (something the original board was able to accomplish). On Opening Day, for some reason, career hitting stats was shown for Met ballplayers, but not for the opposing team. 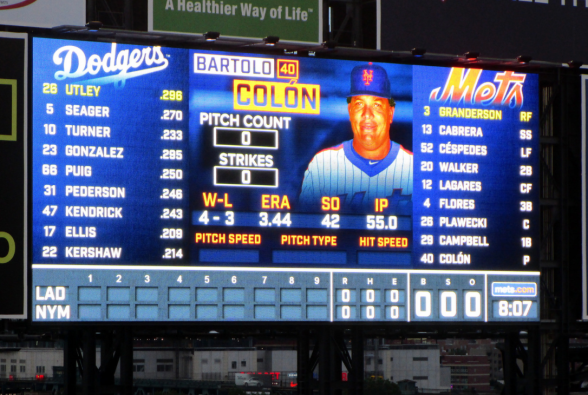 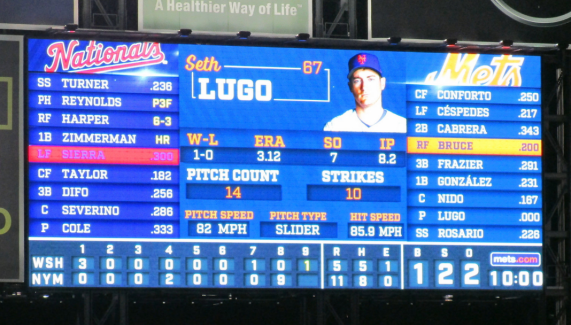 It’s nice to see the line board back full time, and the time makes a return. And, while I wish the Mets.com sign was replaced by the temperature, this is a pretty nice board.

The board is always showing this throughout the game. No more cut-aways, live game feeds, or chants on this board. Between innings, the pitcher disappears in favor of a Mets skyline logo.

2017 was probably the lesser of the three in terms of how refined it was, as the lineups began to disappear during any bullpen move, or when anyone was warming up. 8/10.

So, that’s the history of the Citi Field right field boards. While one might think the differences are few and far between, the scoreboard is a huge resource for anyone who keeps score, or for those that watch the game intensely. It’s interesting to see it evolve and change over time, and I look forward to seeing it improve in the future.