Baseball is here, and I’ve witnessed it!

The exhibition version, at least.

Another year of Spring Training has come, and Mets fans have flocked down to Port St. Lucie, at the newly renamed First Data Field, in it’s last year before a massive remodeling that is planned.

Unfortunately, the only way to get there is by car. Parking a vehicle costs $10, which is what most people do, and there are a few others that take a taxicab or walk from Peacock Boulevard (the walk is about 30 minutes from most of the major hotels).

One you pay for your parking ticket, they make you wrap around the stadium only to park in a grass lot, about 500 feet from the ballpark gate.

My intentions for ticketing were to go to box office and pay the $17 for berm seats. However, may plans changed when a scalper came up to me and offered tickets in covered seating for $12 bucks a pop, which I (reluctantly) accepted.

Security was covered into two sections, one with metal detectors, and another with wands. Naturally, I went to the less invasive one, with wands, and was immediately ushered in and had my ticket scanned. 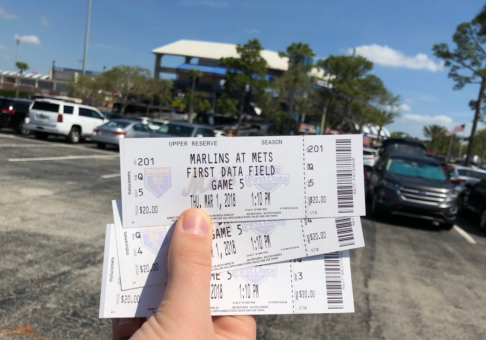 I sat in five seperate seating locations at the game this afternoon. My assigned seat (in section 201) was probably the worst, not because the view was inadequate, it wasn’t, in fact, it was phenomenal, but it was the most densely populated area with no breeze, which wasn’t pleasant on a dry 88 degree day.

I then spent another few innings out in the berm, and a few by each bullpen. The good news is that for the most part, you can enter any section besides the premium box regardless of if it’s your ticketed section or not.

I didn’t really go all out today, mainly because you can’t do that at First Data Field, unlike some other stadiums. The only non-basic concession was Sonny’s Pulled Pork, which I tried, and was actually pretty tasty. 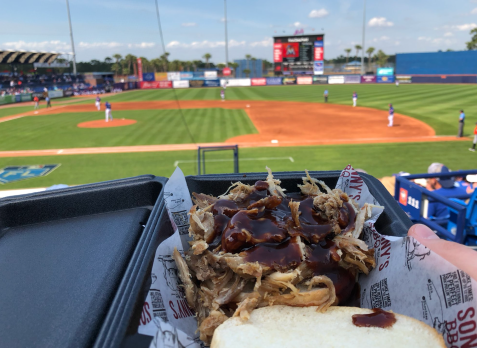 I really enjoyed today’s game, especially when I interacted with people in-person and on Twitter. However, I especially enjoyed the game because it was my father’s birthday, and we spent some nice quality time together. Additionally, it was nice to see Jason Vargas in a Mets uniform, and see the crew on the playing field again.