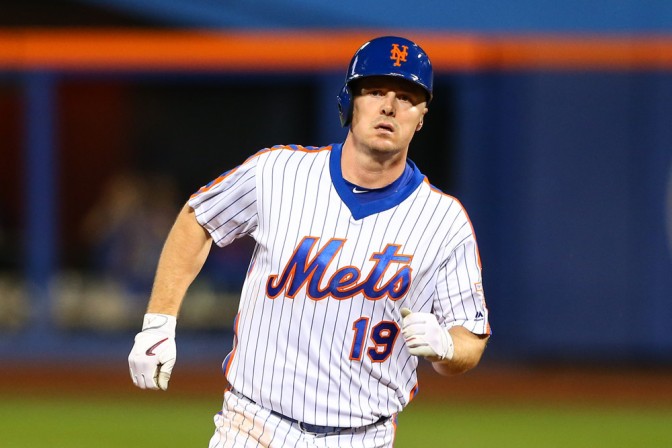 04 SEP 2016: New York Mets right fielder Jay Bruce (19) rounds the bases after hitting a homerun during the game between the New York Mets and the Washington Nationals played at Citi Field in Flushing,NY. (Photo by Rich Graessle/Icon Sportswire)

A few days ago, the news broke that the Mets have signed outfielder Jay Bruce to a three year $39 million dollar deal. A very affordable deal for a reliable old toy.

What was Jay’s role going to be?

He was going to be the right fielder at least until Conforto came back, and he could play all three outfield spots as well as some first base is the situation warrants it. Some people questioned it considering first base and the outfield is not a position of need for the Mets (like third base), but, considering how Bruce is a reliable guy that brings clubhouse leadership, and usually puts up 25 homeruns and 80 RBI’s by year’s end, the deal was met with praise.

Great, the Mets are off to the races, now let’s get a closer and a third baseman!

The #Mets now have decided to sign 1B Adrian Gonzalez pending a physical.

In the twenty minutes since the news has broken, it has been met with criticism, some of which is warranted, and some not.

This does send a message that the Mets have little to no faith in Dominic Smith, who underperformed in his’ cup of coffee in 2017. Additionally, this probably means Dominic Smith will start the year in Triple-A Las Vegas, so he can get four at bats on a regular basis, something I can’t see him doing if everyone is healthy to start the year.

On the singing itself, it’s certainly a little strange; Gonzalez was  one of the best players in baseball a few years ago, but he’s fallen off a cliff the last two years statistics wise, and it’s ultimately a cheap Michael Cuddyer type move.

Does this excite me? Somewhat. It’ll be surreal to see Adrian Gonzalez in the orange and blue, but after the initial shock, I don’t think the Mets will see extraordinary productivity from him.

That being said, this whole post is remarkably similar to what I said when Colon signed in 2014, and I was dead wrong, so I will withhold judgement.