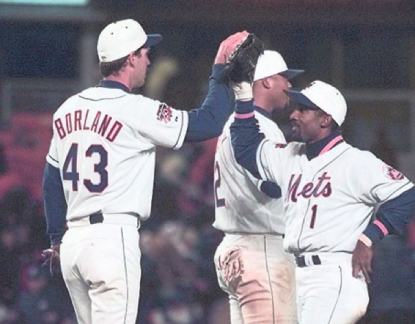 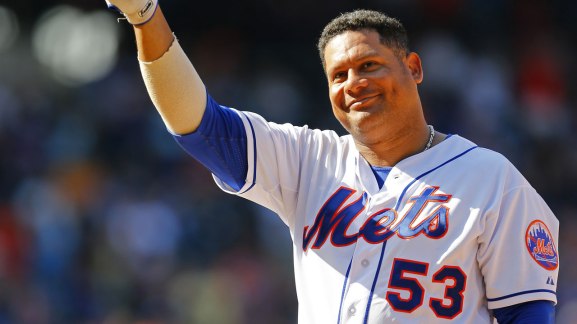 In their 55 year history, the Mets have had some of the best uniform designs in pro sports. That being said, there have been a lot of subtle small changes to the Mets looks that have kept it evolving throughout the history of the ball club.

Today, we are going to take a closer look at one of the more under appreciated uniforms, the all white pinned uniform, known informally as the “Snow Whites”

The Snow White Uniforms debuted back in 1997, 20 years ago, on April 15th, during the first ever “Jackie Robinson Day”. Prior to the game the Robinson Family and Bud Selig proudly proclaimed that the #42 would never be issued to another player that didn’t previously wear #42. To honor the special occasion, the Mets trotted on in their Snow Whites, which resembled a classic Dodgers look, and were matched with a predominantly white cap (with a blue brim). 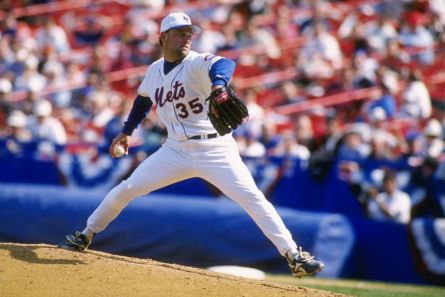 The cap was not a hit, and was discontinued at the end of the year. The uniform top also had a subtle invisible white outline around the “Mets” word mark for the 1997 season, which was replaced with the black outline (known as the drop shadow) for the 1998 season. The drop shadow was invented by  Bob Halfacre (Uni-Watch did a whole story on this, so check out the full article here) Bob described his design in a way that I think most Mets fans had never even contemplated. “City of shadows” he told Paul Lukas in a 2015 interview. “You have all these skyscrapers, so everything has shadows. City of shadows.”

In 1999 and 2000, the snow whites were worn during the two famous postseason walk-off blasts at Shea Stadium, by Todd Pratt and Benny Agbayani, the only difference between the two tops were the lack of a name on the back of the 1999 version. 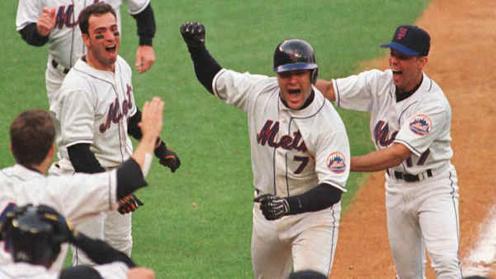 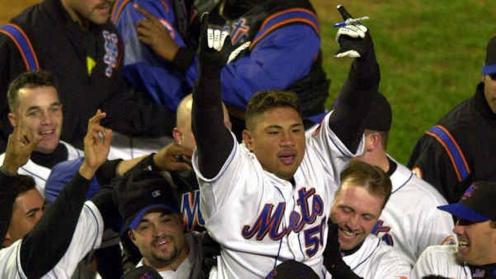 Paired with the more appropriate black hybrid cap, this uniform looked pretty good around the 2000 NL Championship year. The Mets even lost the World Series in their snow whites, technically an alternate at the time, instead of their pinstripes.

However, the most historical moment in a snow white uniform has to be Mike Piazza’s 9/21/2001 blast, giving the city hope after the tragic 9/11 attacks. I asked my Twitter followers which Mets game (in snow whites) was their favorite, and it’s no surprise that Piazza’s heroics in 2001 won-out:

Starting a new series on my blog about uniforms.
To you, which of the following was the most important #Mets game while wearing snow whites?

If you’ve never seen Piazza’s homerun (how?), it’s worth checking out:

This home run, an example of how sports can aide at the worst of times, is undoubtably the best 30 seconds of any Met in a snow white uniform, and probably will always be, even if they decide to bring it back in the future.

However, I want to go back to something. Remember when I called the snow whites “technically an alternate?”

That’s because, in every season that the snow whites were around, the official home jersey was an identical white jersey (or cream after 2010) with blue pinstripes. However, the Mets rarely (if ever) took the field in those pinstripes, and the style guide (the internal design book of MLB Uniforms) listed the snow whites as “club preferred”, and was typically worn the the black trimmings (undershirt, helmet, socks etc.)

In 2007, following some use in the 2006 Postseason, the Mets pinstripes made a comeback, and returned to it’s real “primary home” title. However, the Mets still brought out the snow whites for big games, like the Home Opener at Citi Field: Even in the 2011 MLB All-Star Game, Mets hitters Jose Reyes and Carlos Beltran trotted out in their snow whites. 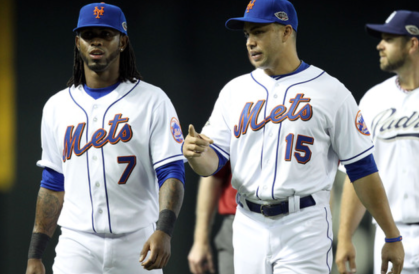 This all changed in 2012, when, for the first time since 2000, the Snow Whites changed. This time, the drop shadow was cut (as it was for all uniforms to commemorate the 50th Anniversary season of the Mets). 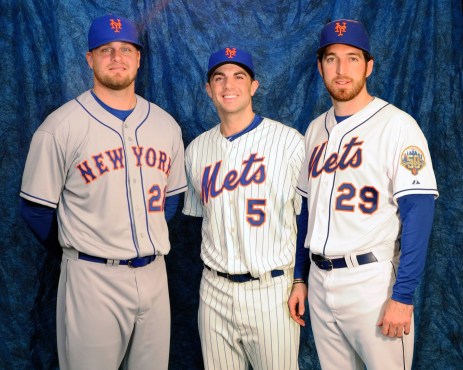 This was one of the best looks the snow whites ever had; unfortunately it ended up being the last, only worn from 2012 to 2014, before being cut in a “merger of designs” between the cream pinstripes and the snow whites. This version was typically only worn during dame games, with the only exception being night games when Johan Santana requested the snow whites. One of those days was June 1st, 2012. The day when Johan threw the first no-hitter* in Mets history:

Santana’s no-hitter wasn’t the only Mets moment in 2012 where a Met pitcher celebrated in snow whites. R.A Dickey got his 20th Win in Snow Whites during his CY Young season:

In 2013, the Mets introduced two blue alternates, and in 2014, camouflage was introduced for select Monday home games. This meant that, including the black, which wasn’t worn regularly since 2011 but remained in the internal uniform set, the Mets had six uniforms. So, after the 2014 season, in effort to simplify their looks, the Mets did away with the snow whites. They were last worn on September 28, 2014, when the Mets played the Astros. 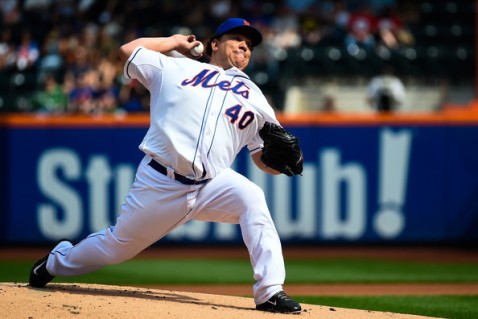 The Mets snow white tops were a good look and were used during some of the most important games in Mets history, they never looked like the perfect Mets uniform, but in 2012, with only one alternate, they were a nice weekend shakeup. However, with the blue alternates, they became unnecessary, and led to poor use of the cream pinstripes.

I do think the Mets will bring back the snow white uniforms, unlike the black alternates, but it won’t be for a while. There is something very calming about the plain nature of the snow whites, which worked well during lazy summer day games. That being said, there isn’t a pressing need to revive them, so I doubt we will see them come back anytime soon.