If Syndergaard has to miss substantial time, who should replace him?

Today, during the Mets versus Nationals game in Washington DC, Noah Syndergaard was pulled in the Second inning, with “a possible lat strain” and was reportedly headed to New York for an MRI.

Syndergaard was removed for Sean Gilmartin, who then opened the game up, which lead to a 23-5 loss.

Unfortunately, this means that Syndergaard will miss some time, and potentially longer if the results of tomorrow morning’s MRI are not favorable. So, the Mets are going to have to look at the alternatives that are available to the Mets immediately, which, until Lugo or Matz are ready to return, could make some critically important starts.

Here are three of the possible alternatives that the Mets could call up/move to the rotation while Noah is recovering:

Pill is the wild card in the deck, but is a formidable option that has been pitching with a lot of success in the minor leagues. Through 22 minor league innings, Pill has yet to allow an earned run, and has only walked two people while striking out 8 (1.12 WHIP). Pill is 26 years old, and has been stuck in Las Vegas since 2014, so if he is going to come up, now is the time. The only question is promoting him is too big of a Pill for the Mets to swallow. (Yup, first to make that joke!)

Probably the most practical solution, slotting Sean Gilmartin in for Syndergaard makes sense. First, he is already here and pitched today, albeit with little success. Gilmartin has spent time in New York since the year 2015, and has transitioned for the lefty specialist to the long man, and I think his role as the long man is the most important role he will play this year. While me might get a few starts here or there in a pinch, I don’t foresee him in a starting role for more than one game. 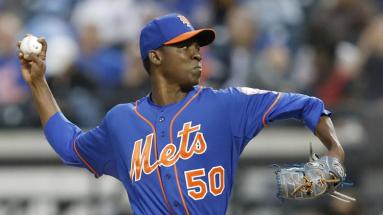 Montero, who continues to get chance after chance, might get one more opportunity to shine in the Mets rotation. He pitched brilliantly yesterday, not allowing a hit through five innings in Las Vegas, Unfortunately, I really think bringing him up will just be a waste of time, and while the Mets might not have the luxury, Montero seems to have an un-known problem when he pitches in the big leagues that he doesn’t have in Triple A.

Who do you think the Mets should promote?