However, I did want to do a Mets-related New Year’s post, so I thought I wanted to do a post where I share my “Blue Year’s Resolutions” or, Resolutions for the Mets. 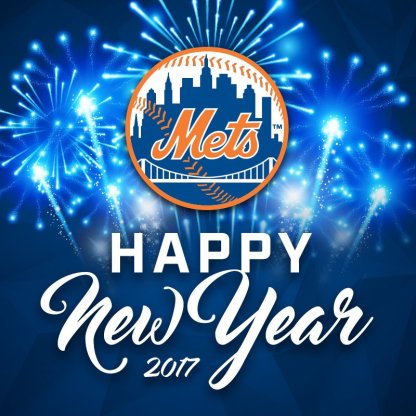 1. Enjoy the Blue, Orange and Blue!

Last year, the Mets wore Blue Uniforms extremely scarcely, and, it might have been rightfully so, considering their record last year in the blues, however, I’m hoping the Blues will be worn with some more regularity in 2017. Maybe they can be worn on day games, as the blue shines brightest in the day light, and has been limited to night games in recent years.

2. The Orange and Blue will be less Black and Blue

I know that injuries are inevitable in a sport like Baseball, but hopefully we will see a few less injuries this year, as last year was slightly crazy.

To put it in simpler words, I’d like to see pitchers that aren’t named Robert Gsellman and Gabriel Ynoa starting in July (even though they did a good job last year).

Last year, I attended 25 regular season games in Citi Field, and this year, I’d like to attend a few more games. It’s important to know that I’m not a season ticket holder, rather, I buy single game tickets on a day-by-day basis, which is great because I’m not confined to one area of the ballpark, which I love.

What are your “Blue Year’s” Resolutions?????