#MetsPlus360 Reflection: Piazza and the Hall Of Fame

Earlier this year, I was invited to a few events for Mike Piazza’s induction into the Hall of Fame. Today, I wanted to explain them a little better, as the coverage of the events when the happened was relativity poor:

The first event was the Farmer’s Museum Reception the night prior to Induction Day.

In the event, I met Mr.Piazza, and had a good conversation with him about his induction. While it was a thrill for me to talk to him, I got the feeling (which was more than understandable) that he wasn’t really caring about what I was saying in return, as he had heard the same cliche stuff from at least 25 others within a five minute time period. I guess the fact the I cannot really feel what that’s like is what made the moment so special for me.

Additionally, while I enjoyed having some dialogue with him immensely, I couldn’t help but feel like I was in an area that I didn’t belong. Not because I didn’t have proper credentials, but because I hadn’t properly earn the right to be in that area yet. I’ve only experienced that a few times in my life as well, and, it too is a strange feeling.

I did make the most of the time, though. I got to take a photo with Commissioner Robert Manfred, and I got to interact with a lot of different personalities of the game that I respect and look up to.

The second feature was a feature of the Number Retirement Ceremony, where, in chronological order, I went to a hotel I could never afford, get a cool credential, be the first one of the first people in the ballpark, go to a Empire Suite, allow Al Leiter to use the bathroom before me, get ushered on to the field, purchase a The 7 Line “Forever 31” shirt, go back to the suite to watch the game, with Edgardo Alfonso and Cliff Floyd next to me!

This, again, was a surreal moment that I worry I didn’t take enough advantage of, and I highly suggest reading this post. 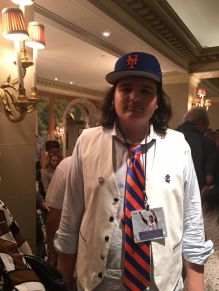 So that’s it. This was essentially just a re-post of two feature stories that were posted four months ago, but I wanted to bring it up again so that I could share a few more details, and share my reflections in public.