#MetsPlus360: Inside look at a Citi Field Tour

For those long time viewers of my blog, you might have remembered when I went on a Citi Field tour back in 2014. For those that don’t remember, here’s a quick summary: Rainy Day, limited access, first time in a press box, first time in a suite, awesome tour guide.

The funny thing about that picture above is that Mike was there today (though not my tour guide, more on that later) and he was wearing the same exact outfit. Un-zipped blue jacket and an orange undershirt. What was I wearing today? A regular Mets cap and the same old black Mets jacket (however, I was wearing my Blue alternate jersey not my old cream pinstriped jersey).

Anyway, I know a lot of people are wondering why I would attend another Citi Field tour after thirty three stressful games in 2016. Well, for one, there isn’t much else to do on a Sunday in November, and secondly the tour is really cool. Even if know Citi Field inside-out, there are so many new things that one can spot when taking the tour, and it’s extremely family friendly, and at only $13 per ticket ($9 for children and seniors, and free for Season Ticket holders) it’s extremely reasonable and worth every buck. There are no more scheduled tour dates as of now, but if you keep on checking the website, I’m sure additional dates will come up before the offseason ends.

Citi Field empty, no music playing, no action on MetsPlaza

On my tour, which started at two o’clock, there were a wide range of people. There were some families with young children, and some people that were adults that just wanted to learn more about the ballpark. Our tour guide, José, was very friendly, and knew the ballpark well. Our first stop was the scoreboard control room and the Foxwoods club. Both of which looked pretty deserted, which is expected in the offseason. 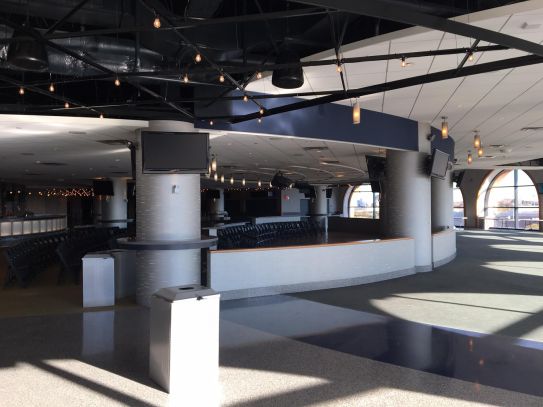 Our next stop was the press box, which is always quite a thrill for me, as someone who admires the working press immensely. The press box has around a hundred seats, and they provide great views of the ballpark. Here’s me trying to fake looking official, despite not having a computer and wearing  Mets apparel both of which wouldn’t fly if this was an actual game. 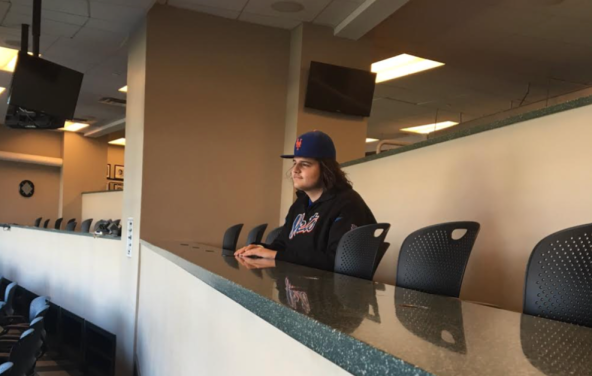 Besides the comfortable chairs, there were plenty of outlets, information placards, and printers, presumably to print stuff like Game Notes, which fans can get as a benefit of Club Mets, something I outlined in this post.

After we had seen everything in the Excelsior Level, we took the elevator down to the second floor, or the Delta Level, as many call it.

We went into a few of the suites, and that’s the first time I got a clear view of the field:

Crazy how the shadows had already covered up the majority of the field and it was only 2:15pm. Definitely not Summer Time anymore…

One thing that did absorb my attention were the prices in the Suites. I know that these are bulk prices, but $130 dollars for ShackBurgers? $110 for Milkshakes? There better be a lot of burgers and shakes there to get your money’s worth.

Next we went on the field, which the young kids were very exited about. The new backstop rollsign that was installed prior to the last homestand in 2015 looks nice, and they were advertising for 2017 Season Tickets. Before leaving the field, we stopped in the dugout, which was awesome. Unfortunately, the Mets appearance in the Postseason means that NL Wild Card advertisements were put up in the dugout (instead of the New Era Cap ad that is there during the regular season) and they were removed after the Mets got eliminated, so the dugout didn’t look as nice as it could have.

Nonetheless, the dugout was very cool. And with that we went to the tunnel. The same tunnel where I ran into Al Leiter in a bathroom prior to Mike Piazza’s retirement ceremony (read this post if you are confused).

We then went into the Mets Clubhouse, and José informed us that photography was not permitted in the clubhouse, which we all respected. Before we went in, I snapped a photo of the clubhouse door:

The clubhouse is a pretty cool place. There were two batting cages, a full length home to first mat, all of the medical offices you could ever dream of, a full service gym and a mailbox for all the players, which was empty, except for Travis d’Arnaud, who appeared to have some letters from Con Edison for whatever reason.

We then saw the Players Lounge and the Locker Room, which was surreal to see up close. I wish I had some picture to share, but rules are rules. Even working press are restricted when it comes to photography in the clubhouse. José informed us of how the system works. There are forty-six lockers in total, and as you grow in seniority, your locker moves closer and closer to the front, where Wright’s (two) lockers are.

Finally, we went into the conference room, where Collins’ gives his pre and post game addresses. Like everyone else on the tour, I took a picture with the Mets signs behind me.

After we saw the old yearbooks which were placed all over the tunnel, we were deposited in the Mets Team Store, and the tour was over.

Verdict: There is no reason you shouldn’t take the Citi Field Tour. It’s fun, there are plenty of photo-ops, and makes for a cool gift. Unfortunately, getting to Citi Field can be quite difficult in the offseason, due to construction on the 7 Line, however, there isn’t much traffic as the tour doesn’t attract the masses like games do, and I believe there is free parking in Lot G.

Pingback: A Beginner’s Guide to Citi Field « Mets Plus

Pingback: Book a Citi Field Tour This Offseason « Mets Plus