Two nights ago, the Mets fell to the Giants in the 2016 National League Wild Card Game. Here is a personal recap of the night:

Waking up on Wednesday Morning, I had no tickets for the Wild Card game, but I had a fairly good feeling that I was going to find a way to get tickets to the game. 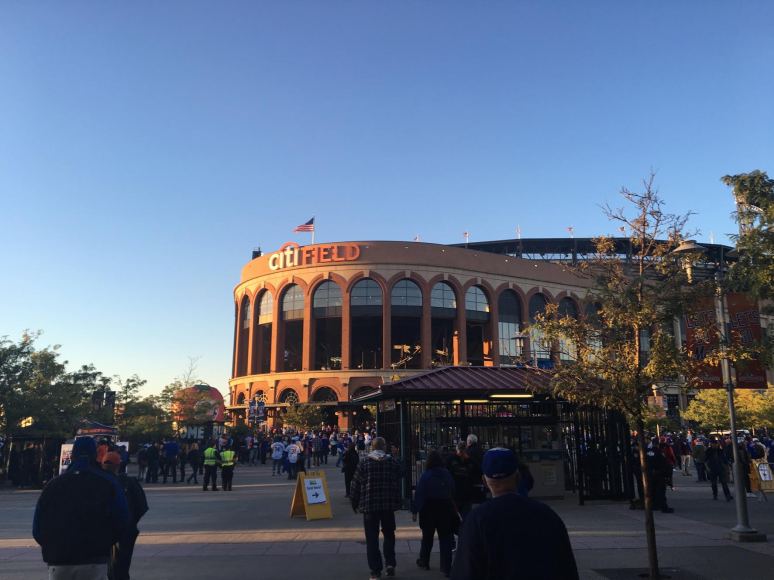 Through one of my relatives connections, we were able to purchase three tickets from Sterling Equities in Section 332, and for those that don’t know, that is a seat on the third base side of the Excelsior Level. So, I walked into the stadium with my mobile tickets (which are convenient, as you only really need your phone until you walk through the gate, as the machine at the game automatically prints out a ticket slip once you scan your phone.) 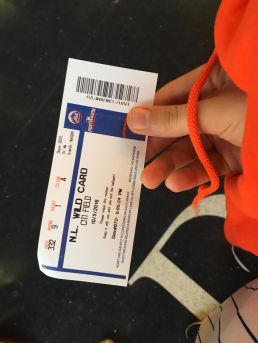 While this ticket is better than print-at-home, it’s still made of flimsy paper

After walking through the gate, I received word that one of my parents friends had two extra tickets on the field level of all places, and after getting all of the logistics worked out, my machine printed ticket slip for the excelsior level became a commemorative field level ticket! 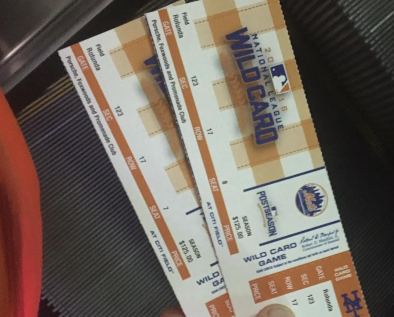 The view from my new section (123) was also very good, but there were a few Giants fans nearby my seat, which I expected, since it was behind the Giants bullpen. Here was the view of the field around two hours prior to first pitch: 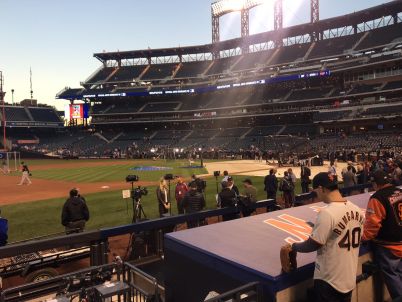 Notice the Giants fans off to the right? They actually seemed like nice folks. I didn’t have a real conversation with them, but they seemed mesmerized by how close they were. Another noteworthy thing was the strange advertisements that MLB (not the Mets) put on the ribbon board during the pre-game. Two that caught my eye was Pepsi (since Pepsi and the Mets just broke up, and there is a giant Coca-Cola sign in right field) and Bank of America (since we were at “Citi” Field).

I sorta wish the Jim Beam ad was a Coca-Cola ad, it would make this image so much better!

I don’t remember this last year, but I do remember seeing strange ads during the 2013 All-Star Game. After enjoying the view for a few minutes, I realized that I was very hungry, and that I wouldn’t be leaving my seat during the game, so I went to Shake Shack. The lines were long, but after half and hour, we had food in our hands. 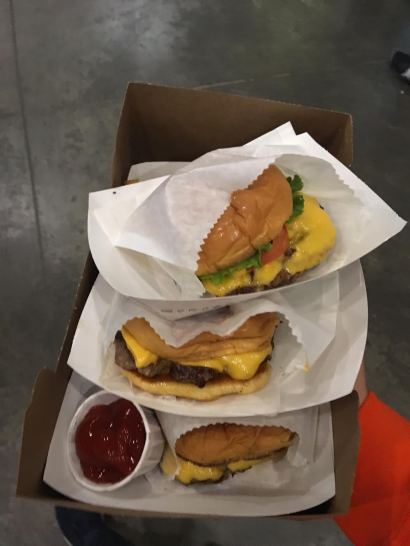 No, I didn’t eat three burgers, we were a party of three….

After eating the Shake Shack (which was good as always), I walked around the area behind home plate, and noticed that the line in Danny Meyer’s other establishment, Papa Rosso, or, Papa No-go, was empty: 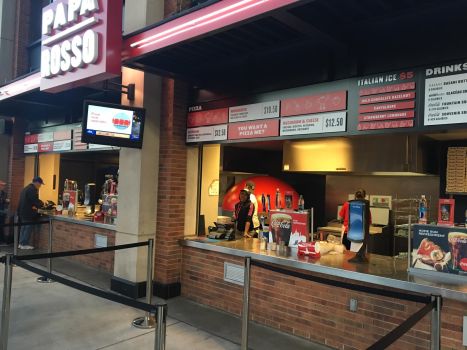 Not sure what happened with Papa Rosso, I’ve never tried the Pizza, and, frankly, I’ve never seen someone trying the pizza.

Anyway, with the start time approaching, I headed over to my seats to hear the introductions of the players. For those that missed the first pitch,  the Mets honored fallen FDNY Deputy Chief Michael Fahy, with his son throwing out the ceremonial first pitch before the actual first pitch. Here’s a clip:

While it was an awesome moment, it’s a little embarrassing that ESPN didn’t film the actual pitch – which was a gem – and instead showed a shot of Michael as the ball cruised into John Franco’s glove. After the players were introduced it was time for Baseball! 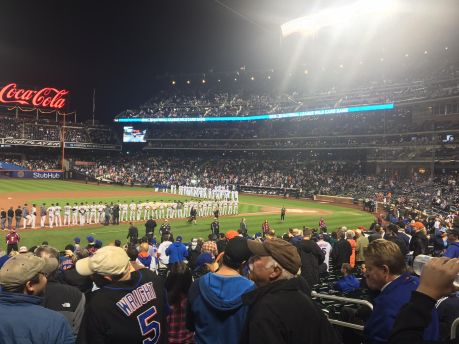 The energy level was amazing, and the Mets decision to hand out rally towels like they did last year was a good one. My mother summed it up very well: It was like going to church. One second we were sitting down, the next we were jumping up and cheering on Syndergaard. The Mets were constantly prompting fans to purchase postseason gear, which you really shouldn’t do since a loss takes them out of the postseason: 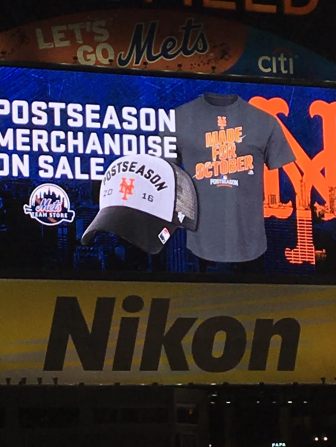 I think the best moment was Granderson’s catch, mainly because, from our seats, we didn’t know if Granderson had caught the ball or not, and when he raised his ball up high, I high fived ten random strangers.

Until the ninth inning, the game was tied, and it was very cool to see all those zeros on the scoreboard, especially after watching the Mets face the Twins, Marlins and Phillies: 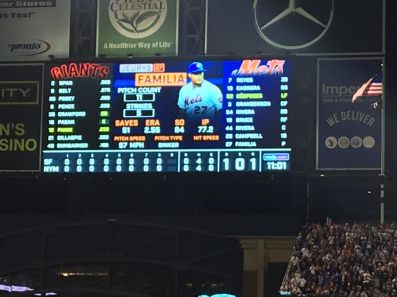 Unfortunately, as we all know, the Mets lost the game, after Conor Gillespie hit a crushing three run homerun, which I recapped here.

After the Mets lost, the focus of the fans quickly changed to getting the hell out of the stadium if you were a Mets fan, or, if you were a Giants fan, pushing over Mets fans to get as close as possible to the Giants dugout. Meanwhile, the final score was displayed for the final time in 2016, with ribbon boards thanking Mets fans for their loyalty and support. 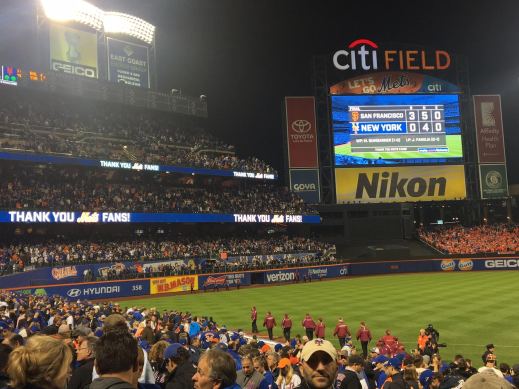 Notice the security running down the line to keep fans in order. After the long, emotion filled game, there were a lot of frustrated faces, but as I’ve learned over the last few years, there is always next year.