Why I’ve been away from the Post this last week

You may have noticed that I’ve haven’t been blogging much the last two weeks on MetsPlus. No, nothing is changing soon, and yes, I’ve been diligently watching the World Series, but I have been avoiding posting on my blog, and here’s why:

So, just bare with me. I know that there is a small group of people that click on my blog, and I cannot thank you enough for that. Stay tuned for more.

With eight stellar frames and a pair of homers, Noah Syndergaard does it all for the Mets in a 4-3 victory over the Dodgers

WOR will re-broadcast Game 7 of the 1986 World Series

WOR is doing something pretty cool on the 27th of October. According to Michael Mayer of MetsMerizedOnline.com, WOR, which can be heard on 710 AM, the last game of the 1986 World Series will be re-broadcasted, with Gary Thorne and Bob Murphy on the call.

The good news is that since it will be broadcasting at night, it will be able to be heard all over the eastern seaboard, since solar radiation will be reduced, which will allow the clear channel network to air from the Carolinas to the Maritimes.

If you have a 1986 World Series memory, leave it in the comments section below, or tweet me @NikoMetsPlus.

Unpopular Opinion: The Mets shouldn’t bring back 1986 throwbacks for 2017 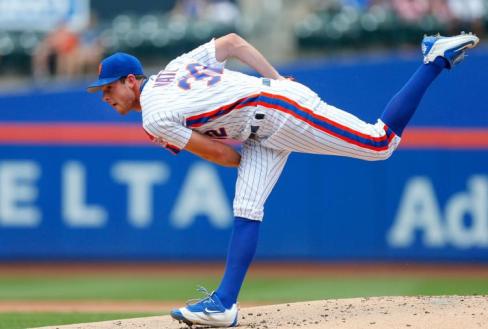 I know, I know, I know. I’m arguing against the best look the Mets have ever had, but hear me out on this one.

This year, in celebration of the 30th anniversary of the 1986 Champions team, the Mets added a third alternate to their uniform set, and it was nearly identical to the original uniforms, down to the helmet squatchee, name plate, and underbrim.

The uniforms also had some interesting modern day quirks, like no breathable underarm and an off-set Majestic logo, which looked beautiful on Sunday day games, the day that they were worn at home throughout the season and during the 1986 weekend back in May.

Everyone enjoyed the alternate throwbacks, or “racing stripes” as they are called, and trust me I was one of them. I purchased a Cool Base version during the last regular season game of the year, and they were frequently sold out, so I’m assuming they sold well, however, I hope that we don’t see the racing stripes return in 2017, and here’s some reasons why:

The best part of the racing stripes uniform is that they are very rarely brought out. I remember how awesome it was in 2006 when the Mets wore the racing stripes uniform for one game. Everytime we see them trot on to the field with the famous stripes, my family and I invoke in historical conversations about the older teams, and it’s limited use is kind of the niche of the whole look.

It’s not the 2017 Mets Uniform. Yes, the Pirates wear heritage uniforms on Sunday as well, but that look is the 1980’s Mets look, not out look. We wear perfectly acceptable pinstripes, a classic road gray, and a visually appealing alternate set of Blues. That’s the look of this generation of Mets, and, if the Mets want to change every uniform to include racing stripes, so be it, I won’t complain, but, I’m more than content with the current uniform set.

It would need adjusting. While it’s an awesome look, there are some issues. First off, the 1986 patch celebrating the 1969 team works for a throwback celebrating 30 years since the 1986 team, as it’s the uniform they wore in 1986, but in 2017 it would be strange to have that patch on the uniform, as it’s not like the Mets wore the 1969 patch in 1987, or any other year that they wore the pinstripes that wasn’t 1986. Also, I’d really hate to see New Era logo on the classic cap with the gray underbrim (even though since it’s a throwback, the cap might be exempt from the logo, but I doubt it.)

It wouldn’t be as special next time we find the occasion to wear them. Yes, I was thrilled when they wore them for the first time in April versus the Phillies, I loved seeing them during the 1986 weekend, and all the way through the end of the year, but they became less and less special as every week went past. I always loved seeing them, just slightly less and less as the season progressed, I mean, when they gave away the Mike Piazza bobblehead on his weekend in July, it was strange how we wore 1986 throwbacks. Putting them away now will let us gain excitement for the next time we turn back the clock.

I do, however, like the idea of a Sunday alternate. Perhaps the home blues, which were only worn four times in 2016, can become that uniform.

Reyes will be with Mets in 2017; team will pay Jose league minimum 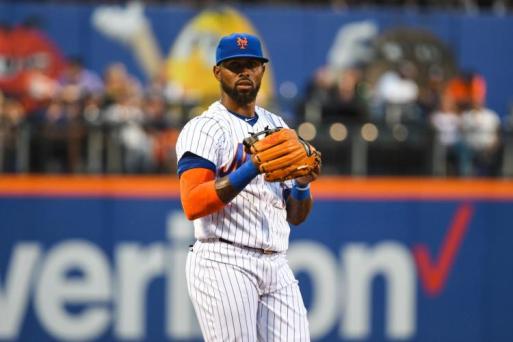 According to CBS Sports, Mets intend to exercise infielder Jose Reyes’ contract, which will allow him to return to Queens in 2017. Reyes was productive in the time he spent with the Mets this year, as he batted 267 with 8 homeruns in the 60 games he played. Reyes also brought speed and energy to a deflated team, and despite the allegations that prevented him from playing with the Rockies in the beginning of the year, everyone seemed to enjoy his presence with the team.

One interesting thing that should be noted is that Reyes will be payed league minimum from the Mets, and will receive the final $20 million dollars from his mega deal dating back to 2012 from the Colorado Rockies, so, there is no harm in picking up Reyes’s contract.

This makes me feel much more comfortable about the infield as a whole. Duda, Cabrera and Reyes are three players that I believe we can count on to play over 140 games each if they stay healthy, and Wright could potentially play around 100 games if nothing acts up, with Flores playing the remainder of the games at third and filling in along the infield as the season progresses.

That’s not a bad infield at all, we just have to stay healthy, which is often times half the battle.

#ThePlusInMetsPlus: NYC Transit under one map? Is it possible?

Do you guys remember when I interviewed the founder of the “Bullet Map”, the map with all of NYC’s transit lines under one map? Well, now you can donate money by going to his Kickstarter campaign, and, if successful, there will be posters and an app available of the Bullet Map.

Below is the original interview for those not in the know, and I can now confirm that the Subway lines are now color sensitive!

In the last #ThePlusInMetsPlus, I talked about how traveling can be a hassle as it is, and to some, navigating the worlds fourth largest city seems like an impossible task, but if you study the subway map enough, you’ll be able to find some tricks and shortcuts that gets you to your final destination must faster.

But, first, I need to brag a little bit. I absolutely love the subway, as a kid, it was one of my top two favorite passions, along with Mets Baseball, and frankly still is. Also, I have a virtual map of the New York City Subway in my head, and I mean that. You could ask me how to get from Ditmas Avenue to Wakefield-241 st, or any other combination, and I’d be able to tell you the best subway route. However, keep in mind that I said: “Subway route,”  which is due to the…

Should we pursue Cespedes if he opts-out of his contract this off season?

It’s no secret Cespedes has been the Mets biggest threat at the plate. When he steps into the batters box, the looming threat of a 450 foot shot to the second deck in left field crosses the pitchers mind, and, frankly, that doesn’t happen with any other bat in the Mets lineup.

However, Cespedes’ time with the orange and blue may be up, as sources suggest that Cespedes is heavily considering opting out of his three year contract, and even told some players that “he won’t be back”, according to NJ.com.

Cespedes did not hit a homerun at home during the month of September at Citi Field, and, while he had a strong arm, was very lackadaisical on the field, and made some key errors. Cespedes also went 0-4 with two strikeouts in the NL Wild Card game.

Personally, while I do like Cespedes, I’ve never been fond of his personalities. In Spring Training, he brought seven different cars to Port St. Lucie, and a lot of the discussions around Cespedes, or “La Potencia” as he likes being called,  revolved around non-baseball topics, which I personally didn’t take much interest in, and he was a huge distraction to the entire team.

Cespedes is a great baseball player, and, he might be one of the most talented hitters to ever play for the Mets, but his traits and assets don’t seem to align with the Mets, and his attitude is problematic. I’d rather hold back on Cespedes, and re-invest that money in another area, however, this all contingent on him opting-out, which is something we will hear about five days after the conclusion of the World Series.

A Majestic Departure: Under Armour will become the new provider of MLB Uniforms starting in 2020

Under Armour will be providing the Outer Armour starting in three years in conjunction with Fanatics Authentics, the company that took over the MLB.com Shop.

According to Sports Business Daily, the guys that broke the article earlier today,  “starting in the spring of ’20, all jerseys would feature UA branding, while Fanatics will gain broad apparel rights across MLB, with an exception being headwear that will remain with New Era.”

Could the Mets be re-uniting with R.A Dickey next year?

In the article, the author talks about how while Dickey doesn’t have another Cy Young season in him, and that he might retire once the Blue Jays season ends, Dickey is an innings eater, and that with all of the Mets young guns battling some sort of injury, Dickey would be a good option if the Mets don’t re-sign Colon.

But the one true fact that hit close (a little too close after this year) to home was the last sentence of the entry. “You can never have enough pitching.”

Dickey would be a strong 5th or 6th starter in the beginning of the year, and he’d be a great middle man if we can have our five aces in the rotation at the same time. Dickey finished the 2015 season with a 10-15 record and a 4.46 ERA. Not amazing numbers, but I somehow believe that he’d be better in Citi Field, as he seems to have better success closer to home.

Ultimately, this is only a smart move if the Mets don’t re-sign Colon. It makes zero sense to have two of the oldest pitchers in baseball, that have spent the majority of their time in the rotation, when you have seven viable options that are under thirty years old.

« older posts | back to blog home |
Theme: MLB “retro” | Get a free blog at WordPress.com