The curse of the Blues?

The Mets are a season low four games behind a postseason spot, yet the thing that interests me right now are the Mets uniforms. Well, I’m not a superstitious man, but what I’m about to explain is getting weird, so bare with me.

Yesterday, the Mets lost to Arizona by a score of 13 to 5, while wearing their road blue uniforms, with their road alternate caps. I was expecting this selection for yesterday’s game, as Jon Niese was pitching. For those that don’t know, Niese, Harvey and Wheeler tend to select the blue uniforms whenever they have the chance to. Obviously that’s not always the case, Harvey has chosen the traditional home and road uniforms this year, and in 2014, Wheeler only chose the road blues.

Anyway, if you have been following me on Twitter the last few weeks, you may have noticed that I’ve been complaining about the Mets win-loss record while wearing their home or road Blue uniforms, and that’s because it’s the worst win percentage possible: 0%.

The Mets have worn their Home Blues (the uniform all the way to the right) with the home alternate cap (also the right-most cap) four times this season. And if that sounds like light usage you are correct, at this time last year they wore them eleven times.

Before we talk about why this uniform has been worn so infrequently this year, let’s look at the road blues, which is paired with the road alternate cap (both the left-most image on the diagram).

Definitely more use for the road blues, but the seven games are nowhere near the twenty-two times they wore them this time last year.

I’m not superstitious, but this is getting slightly strange. September is around the corner, and the Mets are still looking for their first win in one of their blue uniforms. In fact, the last time the Mets won a regular season game in their home or road blues was on Saturday, September 26th of last year, the day they clinched the 2015 NL East pennant. 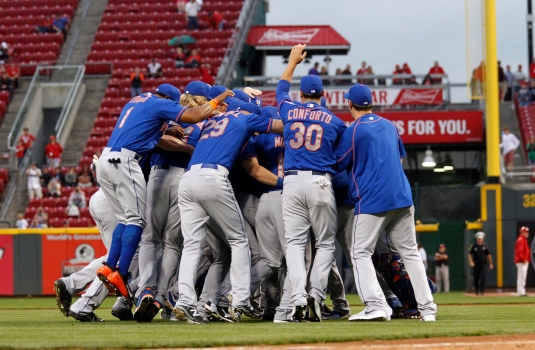 So why haven’t we worn them often this year? My only guess is the material of the Mets home and road caps, otherwise known as Diamond Era. The Mets are the only team that have a regular (non-practice) cap made of Diamond Era, and they have two of them. When I covered a Brooklyn Cyclones game last year, some players told me they didn’t like the feel of the Diamond Era for in-game use, and preferred the traditional Authentic Collection caps.

This is pure speculation as to why the Mets haven’t worn them as much as we have in the past, but it’s the most plausible reason. Additionally, the Mets no longer wear their home blues every Friday like they did two years ago, which also limits their usage.

Ultimately, I love the Blue uniforms, and I think if they had the traditional Mets skyline patch on them, and were paired with the Primary Mets cap, the home blue would be one of the best uniforms in baseball, but the Mr.Met patch, and the Diamond Era Alternate seem extremely unnecessary.

5 Replies to “The curse of the Blues?”