The Plus In Mets Plus, Culinary Citi: A look at the new food options available at Citi Field (Part 1)

However, these last two years, new food options have entered the ballpark, and after doing some tastings during last Saturday’s Brewers vs Mets game, we have composed a food review post for your featuring the new options at Citi Field, on The Plus In Mets Plus.

For this Tuesday's #ThePlusInMetsPlus, which of the following new culinary options should I try?

Part of the catch of The Plus In Mets Plus is the fan interactions that go on to compose the article. Unfortunately, I wasn’t able to come through with the tweet that I sent out. Rao’s eliminated their Lemon Chicken option, so that went out the window, and Papa Rosso turned out to be Pizza only, and it seems to be made from an identical oven that was used to make Two Boots, so I decided to try truly different options.

@paparossopizza and PRESSED by Josh Capon were some new options that I didn't get to try for #ThePlusInMetsPlus pic.twitter.com/3kTPlXsSb6

Other than Papa Rosso, a few other “new” options I didn’t try were “PRESSED” BY JOSH CAPON, Dan & John’s Wings, and new options in Mama’s of Corona inside the World’s Fair Market.

The first stop on Niko’s tour of Citi Field options was Fuku’s Chicken Sandwiches, which is a member of the Momofuku group. Fuku’s flagship restaurant is in the East Side, but their signature Spicy Chicken Sandwich has made the trip to Long Island, which is served with pickles and a certain special sauce thats adds spice. I was very pleased to taste the sandwich, and it’s comparable to a ChickFilA chicken sandwich. 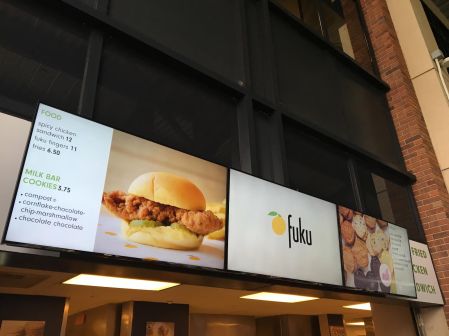 The location of Fuku is good, next to the “Catch of The Day” in right field, and they also serve “Fuku Fingers” and regular french fries.

The next stop on my culinary tour was perhaps my favorite. While it’s not enough for a full meal, PIG GUY NYC, and their now famous “Bacon on a Stick” is available for $7  without any toppings. PIG GUY is located in a kiosk near the World’s Fair Market in the corner near section 105.

I had seen shots of the Bacon on the Stick throughout last year and this year on Twitter, Citi Vision and those who have been tweeting #NikonMets. I was always a little skeptical, as I was worried about how much meat I would get for seven dollars. However, this post was a perfect opportunity to see what the buzz was about, so I decided to get a piece of Bacon with the sweet & savory sauce ($1.50 extra) and I got a no-fat thick slab of bacon. I was amazed. I had some history with PIG GUY NYC, as they are very active on Social Media, and I’ve participated in one of their pig roasts prior to a The 7 Line Army outing in 2014, but I did not expect the taste that I experienced when I devoured the meat (Oh the power of bacon).

Part Two of “Culinary Citi”,  featuring Box Frites, “Milk Bar” cookies and Keith’s Burgers will be published on next weeks The Plus In Mets Plus.

Pingback: The Plus In MetsPlus: Culinary Citi (Part 2) « Mets Plus

Pingback: The Plus In Mets Plus Spring 2016 Review! « Mets Plus

Pingback: A Beginner’s Guide to Citi Field « Mets Plus