The Plus In Mets Plus: Aviation with the AirlineFlyer, or Jason Rabinowitz

Ever since Citi Field was built in the year 2009, there have been many new features that Mets fans have had to become equated with. These mostly good features include two new high definition score boards, new seating options, Shake Shack (and multiple other new Danny Meyer creations), and views of the Flushing Bay and Willets Point. And if you have ever sat in any seat down the third base line, you’ve probably seen many  planes coming in for landing at LaGuardia, and just before doing that, flying right over right field. Back in Shea Stadium, planes used to cause delays to the game, as the noise of the aircraft was too loud and super distracting.

Two weeks ago, we had Zach Honig of ThePointsGuy.com on to talk about Points, Miles and how to turn  them into enjoyable  flights and vacations. Today, I wanted to end the points, miles and flights features of The Plus In Mets Plus with probably my favorite follow that tweets about Aviation on Social Media, @AirlineFlyer, or Jason Rabinowitz. 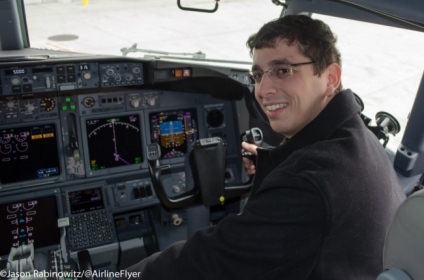 Jason on the flight deck of an American B737

If you follow me on Twitter, you probably hear me sharing my travel experiences to @AirlineFlyer all the time. Combined with good knowledge of travel and a good sense of humor that can be put in every tweet, he is a must follow for everyone who enjoys the travel scene even a little bit.

If you don’t know him, or are anxious to learn about his world a little bit more, he was nice enough to answer some of our questions that we’ve been wanting to know, and of course, there is a baseball twist!

1. For someone who doesn’t know you, could you give a brief synopsis of who you are, and what content you publish?
I’m Jason Rabinowitz a.k.a @AirlineFlyer, aviation blogger and over-tweeter. I follow the aviation industry with a focus on the passenger experience, writing for AirlineReporter.com, Forbes, RunwayGirl Network, and a few other sites. I’m also Data Research Manager for the site Routehappy.com
2. Personally, you and @ThatJohn (John Walton) are my favorite aviation reporters on Twitter, however if you were talking to someone wanting good aviation information on Twitter, who would you recommend to follow?
If you want the best breaking news about the industry, and Boeing specifically, you need to follow Wall Street Journal writer @JonOstrower. For news on the passenger experience, @RunwayGirl is the account to follow. These are two of the finest people in the industry.

3. I’ve followed a lot of your trips on Twitter in the last year or so, and like my trips, things sometimes don’t always go to plan. When was the last time you made zero changes to an itinerary after booking (upgrade, change a flight, cut or add a segment)?
This is a great question. I misconnected at Amsterdamn on my last major trip. Ended up with an unexpected upgrade on the trip before that (the best of unplanned changes). Oh! Last week I flew down to Atlanta and back. Both my flights were on-time and uneventful. Does that count? Something always seems to happen to my plans when I take long trips.
4. What’s your favorite airport worldwide? (I was quite shocked when Zach Honig told me Newark was his favorite airport because of proximity. But something tells me the Central Terminal at LGA isn’t one of your favorites….)
Shockingly, LaGuardia  is not my favorite airport. I know, surprising. Tokyo’s Haneda Airport is absolutely, stunningly beautiful. The international terminal is brand new and more closely resembles an aviation museum than airport. There is a ton of stuff to do there, from flight simulators to massive observation decks. The shopping and dining areas are also really Japanese-centric, and the decor is spot on. Interestingly, I have never flown out out of Haneda. I only went there for dinner while in Japan earlier this year.

Partially broken Neon Signs and hands on experience of “How to stop flooding with a Garbage Can and a Rope” are frequent at LaGuardia.

5. What was the best flight experience you have ever had in your life?
Does it have to be on an airplane? Because I think my favorite flight experience would be the helicopter tour over Hong Kong I did back in 2013. I sat in the left seat up front as we took off from the roof of the famous Peninsula Hotel. It was totally James Bond style. If helicopters don’t count, then it would be when I hitched a ride on the delivery flight of a Fiji Airways Airbus A330. After the long flight from Los Angeles, we did a low altitude tour of all the islands of Fiji. It was amazing.
6. Do you have a points & miles strategy, or do you not stay loyal to one airline or hotel specifically?
Honestly, I really don’t have a points or miles strategy. I’m not specifically loyal to any one airline or brand, and I don’t have any airline or hotel status that maters. I fly too many random airlines to build up enough points on any one.
7. While I love aviation, I actually enjoy NYC Subways & railroads a tad bit more. Do you have a favorite NYC Subway car, or do you dislike the New York City Subway System? (I was always an R40 fan growing up)
I love riding the NYC subway system. I’m a huge public transit fan, and I make sure I take public transit as much as I can when traveling. In New York, my favorite type of subway car is probably the R32. They’re the oldest in the fleet and are way over their expected lifespan. They’re old, but they just refuse to die. They’re not packed with high tech things like automated announcements or dynamic destination signs, but that may be the appeal

Believe it or not, these trains were made in 1964, when Shea opened over 52 years ago!

8. I can’t do an interview with an aviation fan without asking him or her what their favorite airplane is, but mine changes regularly. Do you have a favorite or a personal experience with a type of plane?
If I had to pick just one airplane, it would probably be the Airbus A380. It’s just massive, and doesn’t look like it should be capable of flight. It’s extremely comfortable in every class of service, and lets airlines get really creative with the space available. I just wish more airlines would purchase them. My favorite A380 experience is just when I spent 9 hours of a 12 hour Emirates flight at the bar. What other aircraft lets you do that?
9. Fun Question: If you had to fly one airline (and it’s codeshare/alliance partners) for the rest of your life using only it’s routes. Which airline would it be and why?
Opening this question to codeshare and alliance partners really makes this easy. I would pick United because its route network is the most impressive of the big three U.S. airlines, and they have so many partners that I might not every actually need to fly them!
10. Any experiences at Citi Field, the home of the Mets? There are amazing views of LGA landings at Citi, although they can be distracting…..
Although I do miss Shea Stadium (I sat in an obstructed view seat at game 4 of the 2000 World Series), Citi Field is a fantastic place. It has such a real ballpark feel to it. I’m a Yankee fan (sorry), but I’d rather watch a game at Citi Field every day of the week. And yea, sometimes those low flying planes get a bit distracting. That’s ok, though. I can multitask. 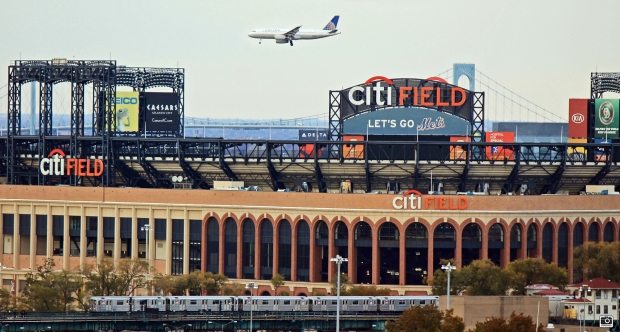 Simply put, there is  a lot going on in this picture.

11. Lastly…. Any predictions for the World Series this year?
As I said, I’m a Yankee fan. So far, it’s not looking like our year. Can I leave it at that?
Once again, the aviation fan evades the baseball predictions question…. but this was an amazing interview and I’d love to thank Jason again for answering some of the questions here. When I promote this, I’ll try not to use a 90’s picture of a Northwest Airlines DC-9 taxing. (And if you don’t get that joke, follow @AirlineFlyer on Twitter, SnapChat and all that jazz)
————————————————————————-
Next week on The Plus in Mets Plus, we shift gears to a different element that can be seen throughout Citi Field: Cuisine.
Stay tuned for that and more on MetsPlus!

One Reply to “The Plus In Mets Plus: Aviation with the AirlineFlyer, or Jason Rabinowitz”