What value does David Wright bring to the Mets?

Ok, I’m not even going to pretend to build up suspense for this one. The answer is a lot. David Wright is quintessential to the Mets, and will be for the foreseeable future. 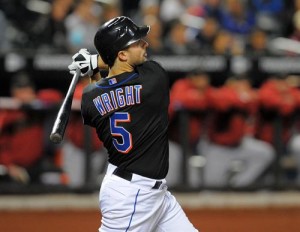 He’s a face of a franchise.

But is he a number three hitter that should play third base?

This is where it gets challenging. Mets Merized Online posted an article discussing moving David to first base.

His issues went unnoticed during most of the regular season because the Mets were winning. But in the World Series, mainly in Game 1 and Game 5, it became more noticeable. In Game 1 Wright committed an error in the 14th inning that led the way to the winning run scored for the Royals. In Game 5, his slow throw to first base in the ninth inning was a big factor to Eric Hosmer‘s decision to run to home plate which he did score as the tying run.

What has affected Wright most defensively, was his throws. His arm now consistently loops throws across the diamond. It just shows how serious and significant Wright’s spinal stenosis injury was.

What David is saying is extremely true. Wright has effect the Mets defensively more than anything. His throws are becoming “banana-like” similar to what we saw with Nats First Baseman (former third baseman) Ryan Zimmerman when he had similar injuries. Ultimately, if and when Duda doesn’t re-sign, it makes sense to transition David over to first base, it will probably give him a few more good years, and with the spinal problems still an issue, the less stressful work, the better.