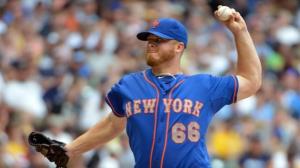 Josh Edgin’s velocity was down last week, Terry Collins noticed this, and told the media. Then, after another outing in relief, Edgin said that he felt discomfort in his elbow. The report then came out the Edgin is going to undergo a MRI. This raised some eyebrows in front of the Mets fan base, as we all know that the Mets lefty relief depth is a little low, besides Edgin, there are only four other “potential” lefty relievers to make the team. Sean Gilmartin, Dario Alvarez, Scott Rice and Jake Leathersich.

Edgin’s MRI results were never officially released to the public, decided to head north to NYC to meet with Mets team doctors. If Edgin cannot break camp with the Mets, I believe Scott Rice will go to Queens, primarily because Rice has a year and a half of MLB experience.