Sandy Alderson speaks to the media in place of Collins

Sandy Alderson spoke to the media for the first time since the Winter Meetings. Terry Collins was originally supposed to speak to the media yesterday, but has left camp due to the passing of his father. He is expected back within the week.

Sandy sounded optimistic, but provided a lot of “I don’t know” responses, which kind of put me on edge…. again. 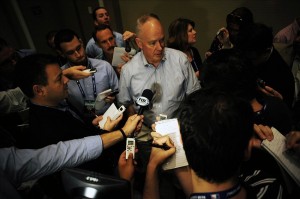 The first game is on March 3rd for the New York Mets, with the first home game (also the first game that will be televised on SNY, will be on March 5th). I have not yet worked out my spring schedule and don’t know if I will be heading down. It looks cold in New York (I’m still in Greece) that we might sneak out there for a weekend.