Interview with the OFFICIAL historian of MLB: John Thorn 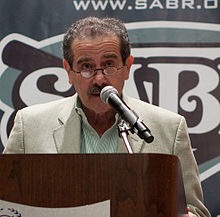 Niko- How did you start being the historian of the Major League Baseball ?

John Thorn- I wrote my first baseball book in 1974 and never expected to occupy the post that, between 1999 and 2008, was first held by my friend Jerome Holtzman. All the same, I was delighted when Commissioner Selig offered me the position, beginning in March 2011.

-What exactly is the role of a MLB Historian?

It is a service position,to assist the media, fans, and the various divisions of Major League Baseball that may need proper documentation and perspective of new initiatives, press releases, and policy matters.

-What does the history of baseball, essentially the past of the game, tell us about the future?

The past is prologue. In other words, while one may not necessarily predict the future by having a knowledge of the past, a bit of history goes a long way in analyzing tomorrow’s prospects, and heighten’s today’s enjoyment of the game.

-Which historical event in our National Pastime has played the most pivotal role in the evolution of the game?

If I had to choose one, I would say that it was Jackie Robinson’s breaking of the color barrier on April 15, 1947. Until then, the idea of a national pastime that excluded anyone was a lie.

-The game has changed a lot from the late 1800s,more changes are being debated this coming year(shortening the game etc). What according to you is he biggest change that took place historically?

See my answer above. But if you’re asking about on-field innovations, I would offer the rule that a foul ball not caught on the fly is a strike unless two strikes have already been called. This rule was used by the National League in 1901 and 1902. The American League adopted the rule in 1903.

-Is there any advice you can give to a MLB Youth writer/blogger like me?

Strive to learn everything you can about the wide world–in history, science, math, literature, art–rather than simply adding to your knowledge of baseball. That way your writing about the game will be different from everyone else’s.

-And finally you may know, the main focus of my blog is the Mets, so I can’t leave you without asking you this: Do you think 2015 is finally the year the New York Mets make the postseason?

No, I think you’ll need to look to 2016. But the Mets should improve their record with Matt Harvey’s return and the continued development of their young starting pitchers.

I hope you enjoyed this MetsPlus.com exclusive. Interview conducted by Niko Goutakolis.

2 Replies to “Interview with the OFFICIAL historian of MLB: John Thorn”