Bobby Abreu had a better career than Derek Jeter

Disclaimer: This Article is not just my opinion, it is backed up by STATS, which tell the story.

One of the great things about the postseason this year is that Derek Jeterfest is over. Derek Jeter IS the most overrated player of all time. Let me ask you some questions to start: Lets say Jeter played on the Royals his whole career, would he still be the same Jeter? NO. The only thing that would have changed would be the fact that we would have been the leader of their team, Jeter never came close to that position as a Yankee. It’s Postseason time right? Well let me ask you this, how many rings did Jeter lead the Yankees to? Yeah that’s right NONE. I can think of 2 memorable playoff plays. 2!!! For a team that made the postseason EVERY SINGLE YEAR, I can only think of 2. Jeter making a good flip to retire Jeremy Giambi and a leadoff shot in Game 5 of the 2000 World Series (even though they were leading the series 3 games to 1). Now you might be saying, “hey….2 that’s not too shabby…” Yes, he had a good career, but not a LEGENDARY career! Jeter Figurine, Jeter Bobblehead, Jeter Keychain, Jeter Bat, Steiner Sports $5,000 Game used bats… PATHETIC!!!
I’ve lost all RE2SPECT for this garbage man. I’m a Met fan, but here’s a quick list of Yankees that were BETTER than Jeter off the top of my head that retired in class without this circus: Number Player Retired
Babe Ruth, Lou Gehrig ,Joe DiMaggio,Mickey Mantle ,Bill Dickey,Yogi Berra,Roger Maris, Phil Rizzuto,Whitey Ford,Don Mattingly,Elston Howard ,Casey Stengel,Reggie Jackson,Ron Guidry, Andy Pettite, Tino Martinez, Bernie Willie and yes my friends Bobby Abreu.

Let’s start with defense, Abreu wasn’t good at Right Field, mediocre at best. He was field smart, meaning he knew where to go with the ball at the right time, but he wasn’t blessed offensively. Jeter however was abysmal. “But no! He makes that jump throw the best!” Wrong check the graphic:

MODERN ERA….. THE WORST SS in the MODERN ERA. Basically, there hasn’t been a worse primary shortstop since 1904…. And I thought Ruben Tejada was bad…. Ok let’s go to offense. I’ll just start with some pretty convincing graphics: 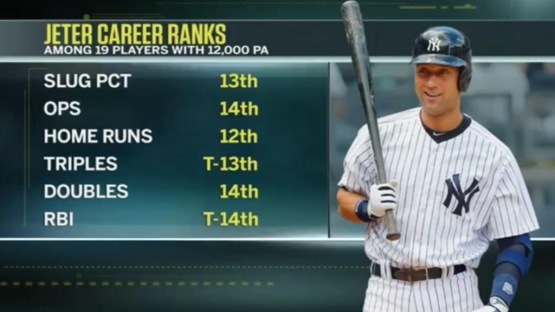 Ok so that shows that among players with longevity he was horrible, but wait I claimed that Bobby Abreu was better right? Right! Let’s start with some of the most household and important stats. And before I start, I want to tell you that Abreu played 2425 games, while Jeter played 2747, however even that won’t matter as Abreu is still better. Let’s go to RBI: Jeter clocks in at 1311, while Abreu clocks in at 1363. Really Jeter? You had 300 more AB’s than Abreu and you still got less RBI’s than Jeter. Well, maybe if you hit the ball out of the infield more often you would actually get the guy from second home. Homeruns? Abreu 288 to 260, and that’s not to mention that Jeter plays in a stadium where a high pop up reaches the second deck. Bobby Abreu deserves the credit. Bobby Abreu is better.
Derek Jeter is nothing more than a good Shortstop.
He would have made 1 all-star appearance if he was in a small market. Good riddance Derek.

Reblogged this on Mets Plus and commented:

This is my post from October. I still believe in this, as it’s TRUE. Let’s Go Mets!

Nice post! I thought this was crazy, but after I read it, you are actually right! Way to get a point across man! I see you are 15 years old. As a fellow teen blogger what are your tips for me? Thanks! I’ll put my link below.
-David S.
http://bleacherboy.mlblogs.com/