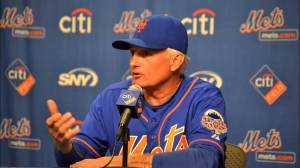 Terry Collins wasn’t all smiles after yesterday’s shutout victory over the Braves. “We didn’t accomplish what we wanted to..” said Collins, who had long preached that meaningful September games were around the corner, and for a while, he had a valid point. Before the 9/11 game, the Mets were 5.5 games out of the second wild card. If the Mets won all the games the Pirates won after that contest, and if the Pirates won all the games that the Mets won, the Mets would be 1.0 game out of that elusive wild card. Collins thinks reaching 500 would be a foreseeable goal, yet hard. The Mets would have to go 7-1 to snap a 5 year losing season skid.