The Season may be over standings wise, but there are still some exciting things to watch this September when it comes to the Mets.

For those of you who doubted deGrom’s chances once he landed on the DL, think again. The rookie went 7.0 with 1 run that wouldn’t have happened if Duda hadn’t made a wild throw to prolong a threat that eventually produced a run, deGrom has 4-5 starts left in 2014, and if 3 of them are gem’s then Jacob has a fair shot at this award. Also, deGrom is just fun to watch, he keeps you at the end of your seat in a good way, and he saves you on ticket prices…. 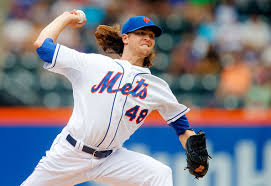 While this isn’t  nearly as exciting as deGrom, its always fun seeing 20 year olds get cups of coffee in the bigs. The Mets promoted 4 players on Monday, 2 position players that we’ve never seen before and two pitchers making debuts. Look for Andrew Brown, Rafael Montero, Matt Reynolds, Gonzalez Germen and Cesar Puello among others to get called up.

Believe it or not, the next homestand will be the last in Kevin Burkhardt’s young career. Steve Gelbs will be covering the Astros series, as “Kev” works his FOX telecasts. Kevin has been a very inspirational reporter since he assumed the job back in 2007, his reports are always entertaining, and hopefully he enjoys his future over at FOX Sports.