On the Rise: Steven Matz 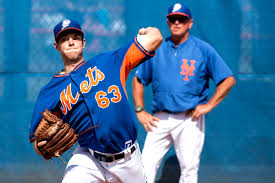 Ever since Matz was drafted in the 2009 MLB June Amateur Draft by the New York Mets, Matz has been getting better and better. His combined ERA in 3 seasons in the minors in 2.39 . He’s logged just around a full season of starting pitching with 233 innings. (A major league starting pitcher that never has a DL stint averages 200 innings per year). Matz is 23 years old, and could get promoted as soon as next year, I assume that if he when he does get the call, he will become a valuable lefty specialist, mainly due to the fact that his SO9 (Strike out per 9) totals at 9.5 . Which is relatively high, and that is generally what lefty specialists are asked to do. (Imagine a starter getting 10 strikeouts every game!) At this moment it is fair to say Matz is the most highly sought lefty pitcher in the Mets organization!

One Reply to “On the Rise: Steven Matz”