After over 5 long months of waiting to sign with a team, starting pitcher Ervin Santana finally has found a home with the Atlanta Braves. The deal is only for one season, but Santana will make $14.1 million dollars. Santana was the last big name free agent left, and what’s most likely to blame for Santana not signing until the middle of spring training is the draft pick compensation rule, where the team who signs a type-A free agent has to give up an early draft pick. Thats why many teams stayed away from Santana, even though he is coming off a solid season. In 2013 with Kansas City, Santana, despite posting a dismal 9-10 record, recording a solid 3.24 ERA and was a workhorse, pitching 211 innings. Even though the Braves pitching depth didn’t seem to be a problem at the beginning of spring training, injuries have suddenly swarmed around their rotation, as starters Kris Medlen and Brandon Beachy, who have potential but long injury history, left exhibition starts early due to injury. 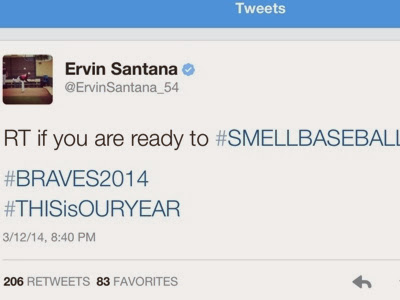 -The Yankees and Tigers tied today after playing 10 innings.

– Mike Matheny will have a confrence with MLB regarding the replay rules. Matheny says in regard to a bang-bang play “if they say the same replay I did; I don’t know how they could’ve missed it”
– The Mets fell to the RedBirds 7-5 today, it marked the return of Daniel Murphy, who was sidelined with a shin injury.
-Tommy Medica (Padres) and Martin Prado(D-Backs) are currently tied with the ST lead for Hits with 14.
-Russel Martin leads the Home run count with 4 so far this Spring!
| back to blog home |
Theme: MLB “retro” | Get a free blog at WordPress.com