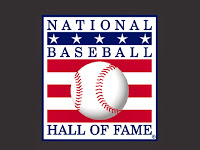 I recently watched MLB Networks “Hall of Fame Debate”. All Winter long I’ve been thinking about who I would elect, and who I want in the HOF. This is probably the toughest ballot I’ve ever witnessed, and that’s a statement I don’t say very often. If I had a HOF Ballot I would vote for 5 players. First off is Greg Maddux, he’s a lock in all voters minds. He might be the BEST player from the 90’s. 2nd, I go Craig Biggio. The Stros are a team that is currently deprived of talent, but their plast shows a different story, Craig Biggio and Jeff Bagwell(Not on my list) led the Astros to multiple playoff aperences during the early ’00s. Biggio put up some of the best numbers in Astros history and should defenently be in the Hall. Third, I go Glavine. Personally, I have a stronge grudge against Tom because of the fact he doomed the Mets in ’07. Nevertheless, Glavine deserves his plague, He had control on the mound. He had multiple All-Star years, and is one of the best Braves of all time. Mike Piazza is fourth on my ballot because is the best hitting catcher of all time. His defense wasn’t complete, but his bat was legend. The only other Catcher that comes close to Piazza, is Jeff Bagwell, who had a higher OBP. Lastly Frank Thomas makes my ballot. The fact that he had more walks then strikeouts speak volumes to me. I would be shocked not to see him get the 75%. Other memorable players that just missed my ballot are Jack Morris, Jeff Kent and Mike Mussina….. And all the members of the steroid gang (Bonds, Clemens, Sosa, McGuire). I think Jack Morris was great, though I never saw him pitch, I’ve heard so much about him and his memorable World Series. Jeff Kent will make it one day, I’m sure of it. He is one of the best hitting Second Baseman in Baseball history, but this years competition is to great. Baseball Think Factory has tracked the 30% of the votes released and 4 of my 5 players are currently in. Piazza on has 70% of the votes, and will need 5% more from the other 70% of the voters that haven’t released there votes. I fully expect all 5 players to get in tomorrow, however if there’s one more player that might squeak in, it’s Jeff Bagwell. And if one of my five don’t make it in, I’ll think its Mike Piazza. There’s no doubt Piazza will make it in, but it might take some time. Don’t forget to watch the elections at Noon ET on the MLB Network.